Something New in Cake Making 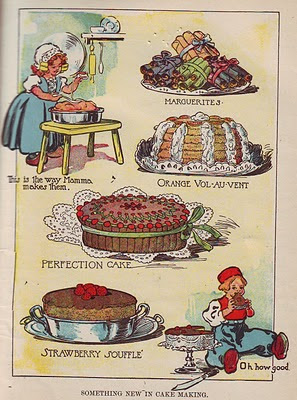 So gorgeous. No idea what that little girl is pouring on the cake "just like Mamma." Hopefully it is not the demon rum. The marguerites are suspiciously colored, but the orange vol-au-vent, perfection cake, and strawberry souffle look mouthwatering. I don't even know what the little boy is chowing down on, but I want some.
Posted by Jana at 5:00 AM 4 comments:

This guest post is from Bethany, also known as my sister and Captain of The Good Ship Lollipop. She did a guest post for me once before -HERE. I look forward to seeing more guest posts from all you other loyal readers out there!


I have been planning to guest post for my sister for several weeks, but finding the perfect recipes turned out to be quite the tall order. Between my list of criteria and hers, it took me awhile to find something:

Not an easy task I tell you! I finally settled on The White House Cookbook from 1887. I found the title quite deceiving. I thought for sure that it wold be recipes from the White House cooks. Not so. The author is simply a fan of the wives of the Presidents, and dedicated the book to them. Though reading through some of the recipes, it made me wonder what she REALLY meant by dedicating the book to them . . . if you know what I mean. 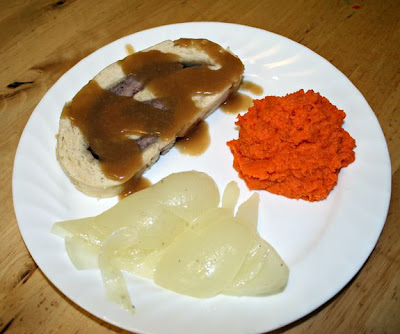 Beef Roly-Poly
One quart flour, two teaspoonfuls of cream tarter mixed with the flour, one teaspoonful of soda dissolved in a teacupful of milk; a teaspoonful of salt; do not use shortening of any kind, but roll out the mixture half an inch thick, and on it lay minced chicken, veal or mutton (I used ground beef, okay?! I wasn't about to go to the work of mincing my own chicken, veal or mutton when I had ground beef in the freezer). The meat must be seasoned with pepper and salt, and be free from gristle. Roll the crust over and over, and put it on a buttered plate and place in a steamer for half an hour. Serve for breakfast or lunch (I served it for dinner), giving a slice to each person with gravy served with it.

Onions - Boiled
The white silver-skins are the best species. To boil them peel off the outside, cut off the ends, put them into cold water and into stew-pan, and let them scald two minutes; then turn off that water, pour on cold water, salted a little and boil slowly till tender, which will be in thirty or forty minutes, according to their size; when done drain them quite dry, pour a little melted butter over them, sprinkle them with pepper and salt and serve hot. An excellent way to peel onions so as not to affect the eyes is to take a pan full of water, and hold and peel them under the water.

Carrots - Mashed
Scape and wash them; cook them tender in boiling water salted slightly. Drain well and mash them. Work in a good piece of butter and season with pepper and salt. Heap up on a vegetable dish and serve hot. 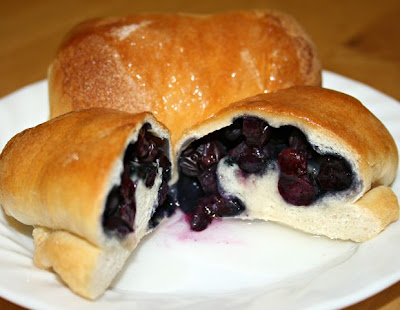 Baked Berry Rolls
Roll rich biscuit-dough thin, cut it into little squares four inches wide and seven inches long. Spread over with berries. (I used blueberries) Roll up the crust and put the rolls in a dripping pan just a little apart Put a piece of butter on each roll, spices if you like. Strew over a large handful of sugar, a little hot water. Set in the oven and bake like dumpling. Served with a sweet sauce.

Beef Roly-Poly - The weird part of this is that it was steamed. The texture of the dough turned out very much like the dumplings in Chicken and Dumpling Soup. My husband and I both found this quite bland. My 6,4, and 2 year olds all ate it up. My 4 year old even had seconds. We also doused theirs with a heavy layer of ketchup. Ketchup makes everything go down easier. My 10 month old happily gnawed on the bread part and didn't seem to object too strongly to it. My husband objected the most and I thought I heard whispers about Taco Bell.

Onions - Boiled - Yummy! If you like the onions that are cooked with roast beef, then you will like these onions. My husband had thirds of them - but they might also have been the only thing on the table that he found edible. My 6 year old at two - but she also dislikes onions in general, so I was pleased with her spirit of at least attempting them.

Carrots - Mashed - These were like baby food. My baby ate them like baby food. Except for he isn't a fan of mashed carrots anyway, so he took two bites and went back to the Beef Roly-Poly dough. Everyone kind of picked at these. It is weird because they tasted and were seasoned just like I make carrots normally with butter, salt, and pepper. So it must be something about that mashed texture.

Baked Berry Rolls - These were good enough. They would have been quite bland without the sugar sauce. Nothing to write home about but the kids ate them all up. Of course I suspect that everyone still had empty spots in their stomach from dinner. So who knows?


Overall we have concluded that either our family's food limitations weed out the good stuff, or the people of 1887 ate very bland stuff indeed. Now I'm headed to Taco Bell.
Posted by Bethany at 7:29 PM 5 comments:

Listen to the Penguin. 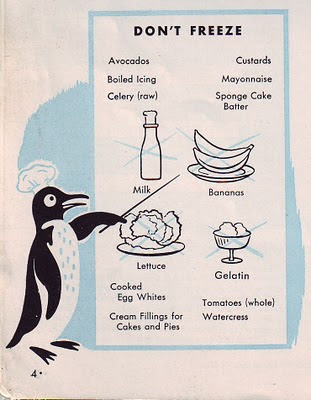 Listen to the penguin! He knows whereof he speaks. Except about the bananas. Frozen bananas are great. Especially in smoothies, and banana ice cream. Also the milk. Frozen milk is fine. And the celery. You can throw it into soup, it'll be grand. And tomatoes. For sauce.

Actually you know what? Penguins are not known for their expertise in the culinary fields. They mainly eat bait fish. Don't listen to the penguin. He's full of it.
Posted by Jana at 5:00 AM 13 comments:

The rabbit has most assuredly died.

Rabbit Ragout (Sweet and Sour)
Prepare as usual. Set on to boil with one onion, a bay leaf, a few whole peppercorns, some cloves and stick cinnamon. Boil until tender, not forgetting the necessary salt.

Add half a teacupful of vinegar and the crust of a rye loaf.

When tender, remove the rabbit to a heated platter. Keep covered until the gravy has boiled down quite thick, adding brown sugar and ginger snaps to thicken the gravy.

Mmmm, buns in the oven.

Hot Buns
Dissolve one piece, or two cents' worth of yeast in half a cupful of lukewarm milk, add a pinch of salt and a little sugar; let this raise. Mix a dough (soft dough) with three cups of milk and sufficient flour to make it just thick enough to roll. Next morning roll, cut round or mold into half-moons. You may add half a cup of butter and sugar, if you wish them extra nice. Let them raise again, about half an hour after putting them in the pan, and when half baked brush them with beaten egg.

Rabbit Ragout: Better than the jugged hare recipe I made, actually. The gravy was pretty good, too. I'm afraid I'm still not a rabbit fan, though, even though it does taste like chicken. The joints... are just so slightly wrong. I did not eat very much. I will also be honest here and say that my mother actually took care of this recipe, as looking at it was making me feel ill.

Hot Buns: Tasty! I didn't add the butter or sugar that would've made it "extra nice", but still just fine. It is just a soft white roll recipe. There was some lovely homemade raspberry jam that went with them delightfully. What is the difference between a roll and a bun, anyway?

Watermelon: I swallowed a watermelon seed.
Posted by Jana at 3:36 PM 11 comments: 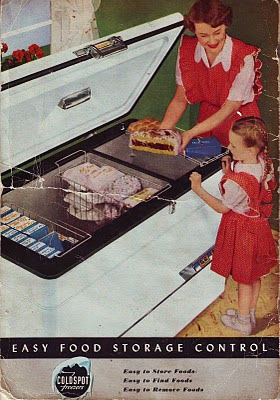 "Well honey, this way, I only have to bake one birthday cake a year!"
My grandma always keeps the booklets that come with her appliances. This is such a booklet.

I really really want to buy this freezer so that I can wear a ruffly red polka-dot apron with ric-rac trim. If I had a daughter, doubt not that she would have a matching one.
Posted by Jana at 5:00 AM 3 comments: