I think this will be the end of the 70's for a while. And none too soon, either. Yeeeeesh. The 1970's was not the most wonderful of times in culinary history. I tell you what though, time travelers, they are fun. Just avoid the food and drink lots of water.

Trivia Question: What baked good, invented in the late 60's, became so popular in the 70's that almost every one of you has eaten it?

Hint: One of the main ingredients is green. 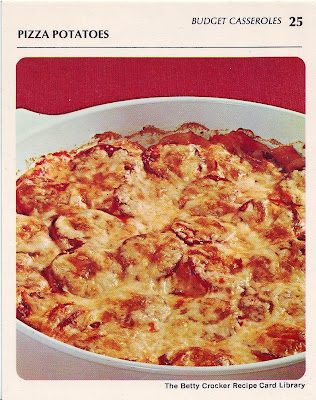 Pizza Potatoes
A pre-measured time saver that's easy on the budget, too!

Pizza Potatoes: Like many things 70's, slightly overwhelming. The processed, pre-made seasoning mix, plus the pepperoni, plus the cheese made it really salty, probably about the same level as ramen with two packets of seasoning. Like other people have done when they were teenagers. Not me. Other people. If it weren't for the saltiness, though, and the anathema I feel towards buying anything packaged that I can make 10x better and cheaper (I am here referring to the boxed scalloped potatoes), I'd make it again. There was sauce, cheese, potatoes, and pepperoni. I have weaknesses. I tried making it again with sliced, boiled potatoes, but the magic was gone. Further research must be done.

Husband loved it, and did not think it was salty at all. However, Husband regularly eats food provided by the military. Let this factor in your judgment.

Lemon Butter Peas: While eating them, I retraced my steps to make sure I had put the lemon juice in. I had. They did not taste of lemon. They tasted of peas. I am intrigued by some of these other variations, though. Almond extract? Soy sauce?
Posted by Jana at 5:00 AM

Email ThisBlogThis!Share to TwitterShare to FacebookShare to Pinterest
Labels: 1970's

I'm beginning to wonder how anyone survived the 1970s without having a heart attack from all the fat and salt. Plus the smoking and drinking like fish. "Oriental Butter" -- soy sauce and butter! Fat AND sodium, delicious! (Of course I just consumed fried rice for breakfast).

And I think the answer to your trivia question is zucchini bread. If I'm the first one with the correct answer, do I win a prize?

You are correct! Well done! Your prize is the glory and admiration of the internet. Hooray!

And I'm not sure everyone from the 70's DID survive in the best of health.

I am so relieved you will be leaving the '70's soon...having started married life in 1972 and baby making in 1974, I am embarrassed to say I lived there and actually cooked and ate some of that stuff.

As for the green stuff, congrats to Karenlibrarian for coming up with the answer. Glory and admiration abound !

I think some weirdos during that time also made a mixture ( pot ) with dried squash and rolled it into cigarettes...deluding themselves, as '70's hippies often did, that it was good for man 'cause it was from the earth !!!

All those different versions of peas makes me wonder what the writers of the recipes were smoking at the time too !

Dried squash and pot? What?

A lot of them grew pot and to stretch the pot a bit, they would dry it, add all sorts of stuff and sell it that way too. Parsley, mint, oregano, dandelion greens etc. You name an ingredient that could be dried and they would smoke it !!!