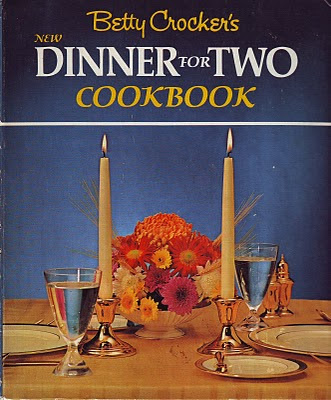 Since our apartment dates back to the 40's or something, our time traveling this week took us to our same apartment, but in the 70's! That is why the background looks the same, despite the automatic wardrobe adjustment circuit. I feel sure whoever is living in our apartment in the 70's will not mind that we used their kitchen, especially as we left them brownies.

Planned-over Meal? This dish, reheated the next day, tastes just as good.

Chicken and Chips Casserole: This has got to be the trashiest casserole of all time! I did the chicken option as Husband is not a fan of tuna, but I did use canned chicken, so I feel I should get points for that. I also used frozen peas instead of canned, because baked canned peas are terrible and I just can't be having with that. Trashy as it was though... it was pretty good. It isn't worth the amazing amount of potato chips, but good. Don't serve this to someone with heart disease, but it's worth a try if you're in the mood for something trashy.

Orange-Grapefruit Pinwheel: Look how pretty! I might just keep this on file for when I feel fancy in the future. I made the dressing out of plum jam instead of currant, and it was pretty good actually. It sweetened up the grapefruit a little. If I did it again, I'd just do the jam instead of mixing it with other things though.

Extra-quick Butter Sticks: Oh my lands. These are fantastic. A whole half-stick of butter melted in there! Husband looooooved these. A lot. Really a lot. Look how they glisten!

Mint Brownies: How have I never thought of putting mint flavoring into brownies before? This is a brilliant idea!

Overall: Oh my golly gracious. Individually, all these were good. Most of them were great. Together, they are an unholy abomination of potato chips, melted butter, jam, and brownies. It isn't that they are bad together, it is that each one of them is so... much, that it is overwhelming. I could only finish half a brownie by the end. Husband happily nabbed the rest of my brownie and stuffed it in his mouth, only to sadly remark that it had turned to ashes in his mouth, so great had been the consumption of potato chips, melted butter (rather a lot, in his case!), jam, and brownie.
Posted by Jana at 5:00 AM

Email ThisBlogThis!Share to TwitterShare to FacebookShare to Pinterest
Labels: 1970's

I remember the Tuna and Chips casserole! Mint in brownies are yummy!!! Where did you get your dress!!! That is sooo 70's. I love it!

Your blog is so much fun!!!

The standard tuna casserole at our house was cream of mushroom soup, tuna, peas, cashews, and noodles. Tuna Noodle Casserole.

Meg (?)- Mint brownies sure are yummy. And of course, the automatic wardrobe adjustment circuit on my time machine took care of the dress. ;D

Jenny Jo- I like tuna noodle casserole! You've got to melt cheese on top though. Mmmmmm...

Oh, you really took me back in time today Jana. You look so cute in that 70's outfit too! I was a newlywed in 1972 and I remember this cookbook. I think it might be in a box up in our attic !

I also am not a fan of tuna ( detest it actually ) and calling that casserole trashy would have been fine with me. It's a joke in our family that I never served tuna casserole to anyone ever, even when everyone else thought it was a good idea !!!

Also, when I was a young woman, I learned to make those bread sticks for our Stake President's monthly dinner for all the Bishops and their wives... which are really yummy !

Thanks, N.B.! Glad I could take you along on my time traveling. :D I am curious though, as to what the circumstances of everyone wanting you to make tuna casserole would be!

The breadsticks WERE pretty great. Sigh. How come most everything that good is sooooo bad? It doesn't seem fair.

I am totally making butter sticks next time you come over for dinner.

I never cooked my family seafood. it makes me ill to smell it cooking or eating it. Whenever someone needed a meal brought in, my Hubs would say, "Hey, why don't you make them a nice Tuna Casserole ?" Then he'd just wait for the disgusted look on my face and my smart retort. He loves fish of any kind and I can't stand seafood.

As for the bread sticks, floating in butter is my idea of heaven !
The worst day of my life as far as seafood goes was when I volunteered at the church cannery and that day, we were cleaning and canning tuna fresh off the boat...icky oooweeeeeee !

Since tuna was often one of the few proteins that stored pretty well in food storage supplies, it was used often as a cheap meal to bring to pot luck dinners or other life occasions needing a meal.

Sweet, butter sticks for me! Not bread sticks, no. BUTTER sticks.

Nonna, Nonna, Nonna. Salmon is one of the best foods in the world. It makes me sad when people cannot appreciate it, but then happy because then there is more salmon for me. Mmmm. So thank you. :D

The thought of cleaning fish makes me want to vomit, and I even like fish. Ick.

LOL Jana, be happy and it's a deal... you can have all the pounds of salmon or any other seafood I DON'T eat while here on earth and we will leave all the fish cleaning to others for sure...makes me want to vomit too.

When my Hubs goes fishing, he must clean it outside and cooks it outside on the grill in a foil package...no fish smells in my house !!!

No, the trashiest tuna casserole is mine own, which is a box of mac & cheese, a handful of frozen peas or mixed veggies, a tin of tuna, and crushed chips.

And while I know you don't do alcohol, my super fudgy secrete recipe chocolate mint Irish Creme brownies are very tasty.