'The Cook and Housekeeper's Dictionary' by Mary Eaton [1822]
Though domestic occupations do not stand so high in the general esteem as they formerly did, there are none of greater importance in social life, and none when neglected that produce a larger portion of human misery. There was a time when ladies knew nothing beyond their own family concerns; but in the present day there are many who know nothing about them. If a young person has been sent to a fashionable boarding-school, it is ten to one, when she returns home, whether she can mend her own stockings, or boil a piece of meat, or do any thing more than preside over the flippant ceremonies of the tea-table. 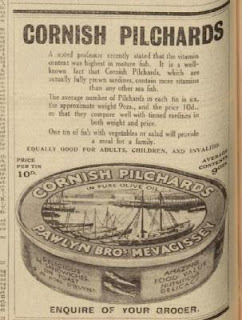 In honor of the "Poldark" binge I have been on, I present: 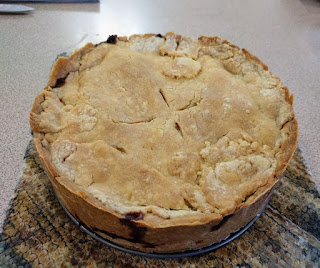 Pilchard Pie!  YAYYYY.  If you have watched "Poldark," you will know that they seem to live on pilchards and pies. And look!  This has pilchards AND pie!  I have no doubt Ross would be all over this.

PILCHARD PIE. Soak two or three salted pilchards for some hours, the day before they are to be dressed. Clean and skin the white part of some large leeks, scald them in milk and water, and put them in layers into a dish, with the pilchards. Cover the whole with a good plain crust. When the pie is taken out of the oven, lift up the side crust with a knife, and empty out all the liquor: then pour in half a pint of scalded cream.

But where can one find salted pilchards?

That's because you are the worst, Elizabeth. You are good for nothing but to preside over the flippant ceremonies of the tea-table.   Pilchards are basically the same thing as sardines.  And as the last tin of salted pilchards was packed in Cornwall in 2005, we're going to hope that canned, salty sardines are near enough to rehydrated salt-preserved canned pilchards.  Anchovies would probably also be a good analogue.  This recipe looks like it may only have a top crust, but I wanted to try a raised pie.  To make a raised pie, we need to make a hot water crust.  It's the first time I've done one, and it was not hard.  I didn't make it very attractive, but it was totally functional. 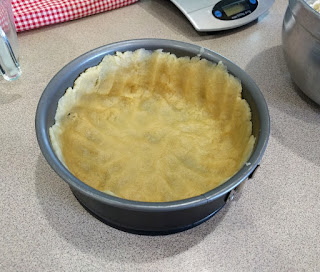 Sift the flour and salt into a bowl, making a well in the centre. Place the water, butter and lard into a saucepan, when the butter and lard has melted bring it all to the boil. Take off the heat. Pour the mixture into the centre of the flour. Working very quickly, mix with a wooden spoon. Then knead with hands to produce a smooth and elastic dough. Allow to rest in a warm place for 15 to 20 minutes. (This pastry must be used whilst still warm, otherwise it will become brittle and hard to mould.) Proceed with your recipe. 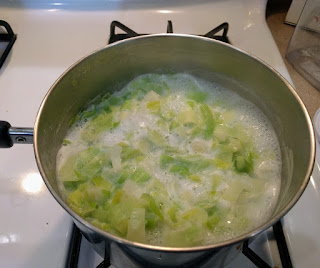 Cook those leeks in milk and water! 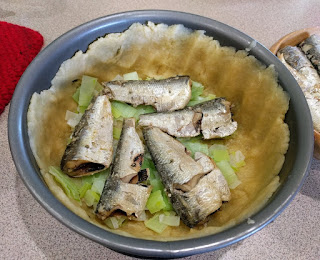 Drain those leeks, and layer with sardines! 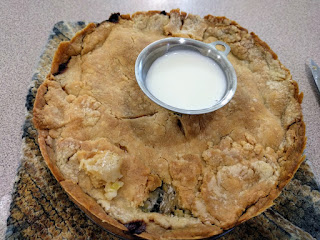 Verdict:
My first victim was a friend of my husband's to whom I offered pie.  I am a bad person.

That pretty much covers it.  My dad, who loves sardines with all his heart, loved it.  My mom, who loathes sardines with all her heart, refused to try it.  Everyone else took one or two bites and was done.  My three year old, who loves pies, kept taking bites and then looking hurt and sad, but kept eating.  She looked confused, like she couldn't understand why pie would keep betraying her.  It basically tastes like how a dock smells.  General consensus: not the worst ever.  But please don't ever make it again.

Thanks to Foods of England
Posted by Jana at 9:36 AM 2 comments:

Email ThisBlogThis!Share to TwitterShare to FacebookShare to Pinterest
Labels: 1820's

Things A Lady Would Like to Know Concerning Domestic Management and Expenditure (Henry Southgate, 1875)

I love this book mostly for the improving quotes that it is so liberally sprinkled with.

Cultivate modesty, meekness, prudence, piety with all its virtuous and charitable occupations, all beautiful and useful accomplishments, suited to your rank and condition.  These are the chief ornaments of your sex, and will render you truly lovely as women and as Christians. --Rev. James Fordyce, D.D. (Yes, the same Rev. Fordyce that Mr. Collins keeps trying to read from in Pride and Prejudice.)

Oxtail Soup.--Make a quantity of brown soup with shin of beef; take 2 or 3 tails and cut them in pieces at the joints; put them into the soup, and stew them till tender, but not till the meat leaves the bones.  Add a little [mushroom] ketchup, and serve it with the pieces of tail in the soup.

Put beef broth, a few tablespoons of mushroom ketchup, and some pieces of oxtail in a pot.  Either simmer for a loooooong time, or pressure cook 45 minutes (natural release).


Verdict:  Actually... great.  Really great.  Really, really great.  This made the best beef broth I think I've ever had.  That mushroom ketchup is really nice when it's diluted.  That, along with the flavor from the oxtails, made the broth so fabulous.  The oxtail meat was tender, flavorful, and succulent.  The kids adored it.  They dunked bread in the broth and had a couple bowls each.

The only problem is how to eat the gosh darn things.  It's REALLY DIFFICULT to get bites off the things!  You probably end up with six or seven bites of meat off the entire thing.  So, a great starter soup I guess, but probably don't base a whole meal off this unless you throw in some vegetables.