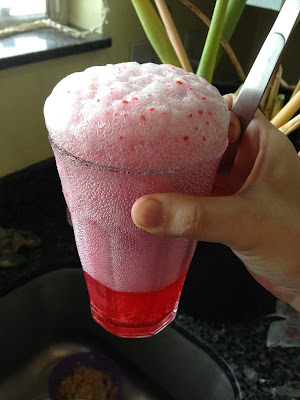 This is a third attempt at an effervescing drink, for teetotalers such as myself.  The first two were Effervescing Fruit Drinks and Effervescing Jelly Drinks, both from Mrs. Beecher's Domestic Receipt Book [1850], both absolutely wretched.  How will this new challenger from the world's most moralizing cookbook fare?

A masculine woman must be naturally an unamiable creature. -Rev. James Fordyce, D.D.

Raspberry, Strawberry, Currant or Orange Effervescing Draughts.--
Take 1 quart of the juice of either of the above fruits; filter it, and boil it into a syrup with 1 lb. of powdered loaf sugar*.  To this add 1 1/2 oz. of tartaric acid**.  When cold, put it into a bottle, and keep it well corked.  When required for use, fill a half-pint tumbler three parts full of water, and add 2 table-spoonfuls of the syrup.  Then stir in briskly a small tea-spoonful of carbonate of soda***, and a very delicious drink will be formed.  The colour may be improved by adding a very small portion of cochineal**** to the syrup at the time of boiling.

*Regular, granular sugar.  The sugar it refers to is a solid brick or cone of sugar, that has to be smashed before use.  I prefer a hammer.  Or to buy it free-flowing.

**Tartaric acid may be found at specialty brewing stores.  Or might not.  In lieu of tartaric acid, the much more commonly available citric acid can be substituted.  Citric acid is 4x less acidic than tartaric acid, so you have to increase the amount by 4x.  Citric acid can be found by asking at a pharmacy, or by keeping your eyes open during canning season.  If you get it from the pharmacy, as I did, expect to pay through the nose.  $24 for the amount that I needed for this recipe.  RIDICULOUS.  All the recipes I've used citric acid for (one) call for just a little bit, so I thought it would last a while.  Nope.  Entire bottle.  Little did I know, two aisles over in the canning section of the exact same store was twice the amount for $3.  I found that out a couple days later by accident, and felt so very angry.

****Cochineal are wee little bugs that live on cacti, valued for their excellent red dye.  And yes, it is still used as a food dye.  People whined about it a lot less when they were literally smashing up bugs in the kitchen to dye confections than they do now where you never see any evidence, which I find strange.  Feel free to substitute pre-prepared food coloring, if you do not wish to mash up bugs.

Verdict:
Very, very nice!  The citric acid works a lot better here than vinegar.  I didn't strain my raspberries like the recipe says, because I am lazy.  I tell myself that the seeds make it look more rustic and homemade, and I think I have a good point.  And once again, it took until I dumped the baking soda in to go, "Oh RIGHT!  Citric acid is made of ACID!" and run breakneck to the sink while it threatened to explode over my hand due to the chemical reaction.

Husband enjoyed it, Toddler threw a tantrum when she finished hers because it was gone, and I thought it was delightful.  Very refreshing, tingly in your mouth like soda but not as sweet.  I think some cream stirred in would be fabulous.  As a bonus, it's just so darn pretty.  It looks like a drink from My Little Pony.
Posted by Jana at 7:01 PM 15 comments: