Pack provision basket as full as the law allows, or as the nature of the occasion and the elasticity of the appetites demand. One piece of good advice to picnickers is to try to get under the wing of some good farm-house, where coffee may be boiled, and nice rich cream, green corn, good water, etc., may be readily foraged; and for a Fourth of July picnic, nothing will taste better than a dish of new potatoes, nicely prepared at the farm-house. -Buckeye Cookery

Since it was a fine day, it seemed like an appropriate occasion for a picnic! There's no place for a picnic like the past, as you may guess from the quote above. I gathered my menu from The Los Angeles Times Cookbook--No. 2: One Thousand Toothsome Cooking and Other Recipes Including Seventy-Nine Old-Time California, Spanish and Mexican Dishes Recipes of Famous Pioneer Spanish Settlers [1906] and made and packed the food carefully, as per instructions: "The basket must be packed very carefully, especially the cream puffs."

Then off we went to Los Angeles in 1906. Unfortunately, I misjudged the calibrations and we ended up in the Utah Territory in 1862. Whoops. Time travel can be tricky. Good thing we invested in the automatic wardrobe adjustment circuit. 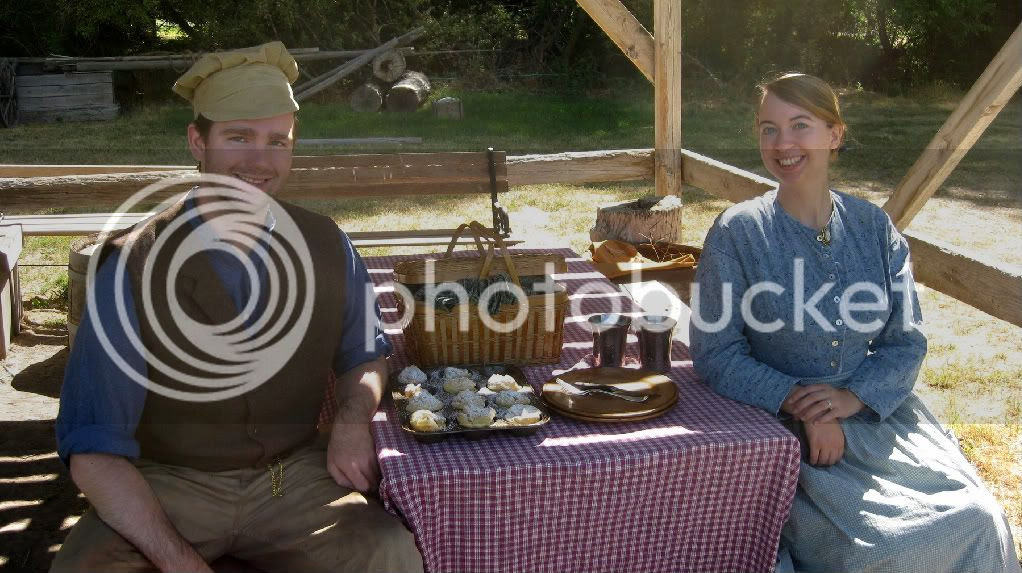 Still! The 1860's are also fine. We just hoped our anachronistic food would not cause trouble. 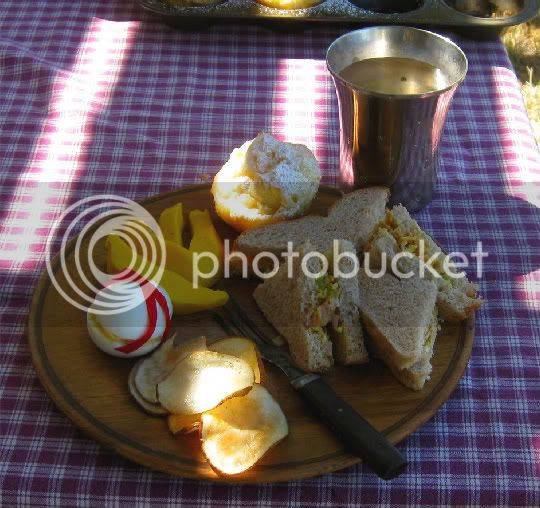 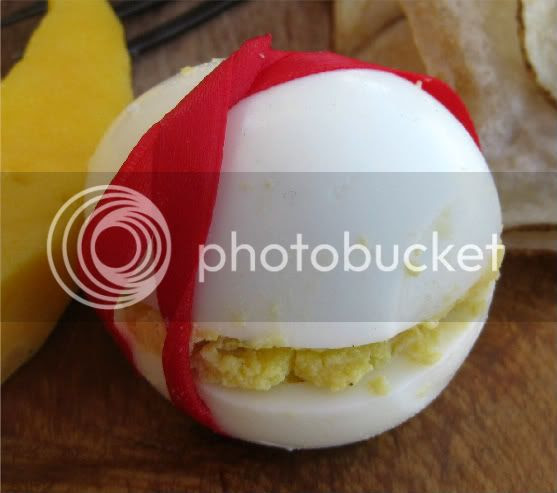 Deviled Eggs
Boil 6 eggs hard, drop them into cold water for a minute, and then carefully remove the shells; cut them in half with a sharp knife, and gently remove the yolks; mash and mix them with a dash of pepper salt, a tablespoonful of olive oil, a teaspoonful of vinegar and a little chopped pickle or parsley. Mold this mixture into balls and replace in the whites. Put the two halves of the egg together and tie with baby ribbon. 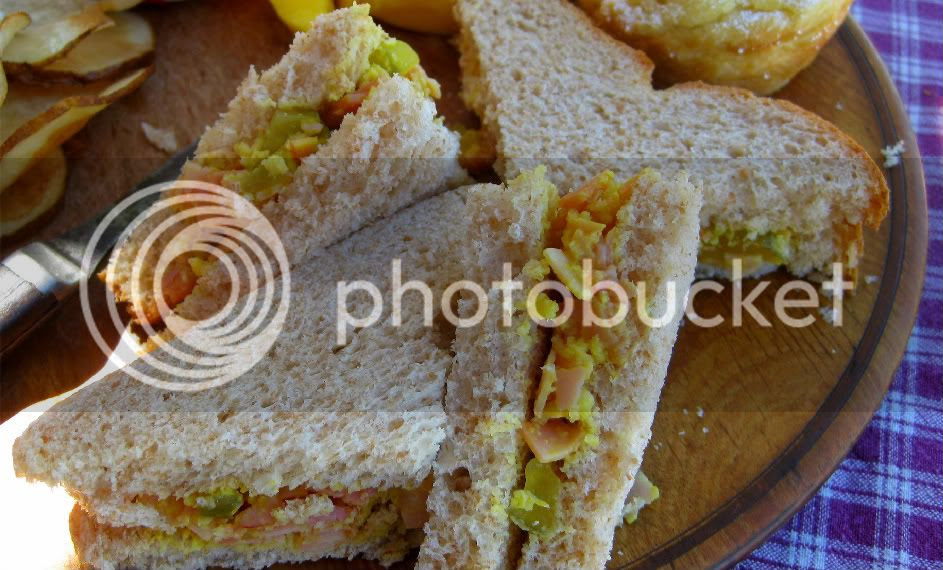 Ham and Pickle Sandwiches
Chop cold, boiled ham quite fine, mix with a little melted butter and made mustard, add some finely-chopped cucumber pickles and spread between thin slices of bread and butter. 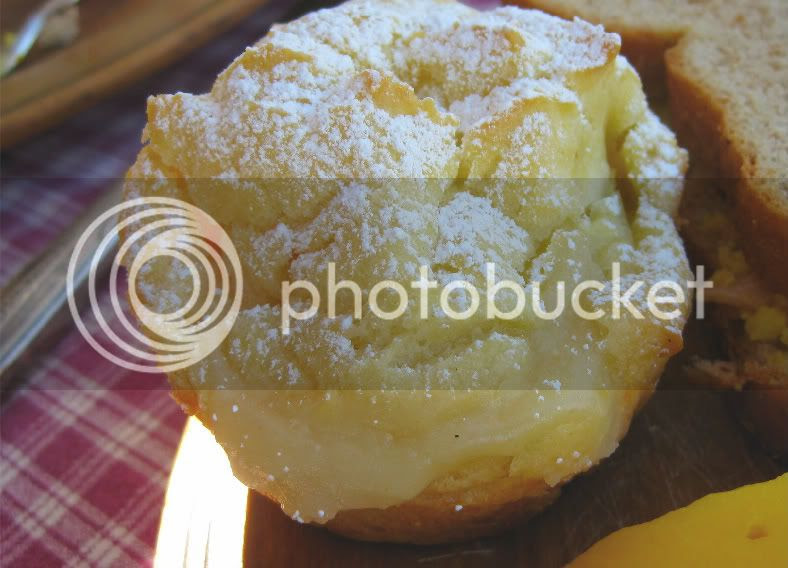 Cream Puffs
Boil 1 cupful hot water and 1/2 cupful of butter together, and while boiling stir in 1 cup of dry sifted flour. Take from the fire and stir to a thin paste, and after this cools stir in 3 eggs. Stir 5 minutes. Drop in tablespoonfuls on a buttered tin, and bake in a quick oven 25 minutes.
CREAM FOR ABOVE. One cup milk, 1 cup sugar, 1 egg, 3 tablespoonfuls flour, vanilla to flavor; stir the flour in a little of the milk; boil the rest; stir this in, and stir until the whole thickens; when both this and the puffs are cool, open the puffs with a sharp knife, and fill them with the cream. 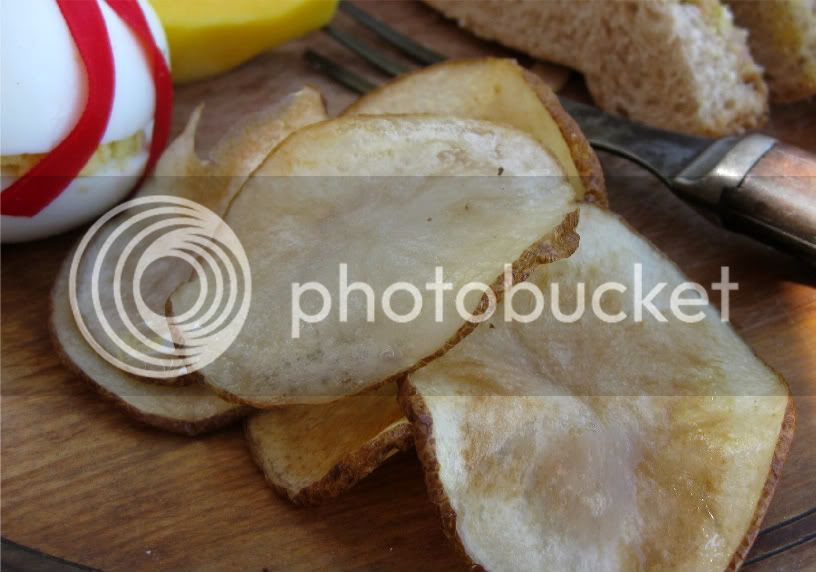 Just as we were finishing, we were spotted by the locals. Luckily, they were easily bribed with cream puffs. Sugar is scarce and expensive in their time and place. 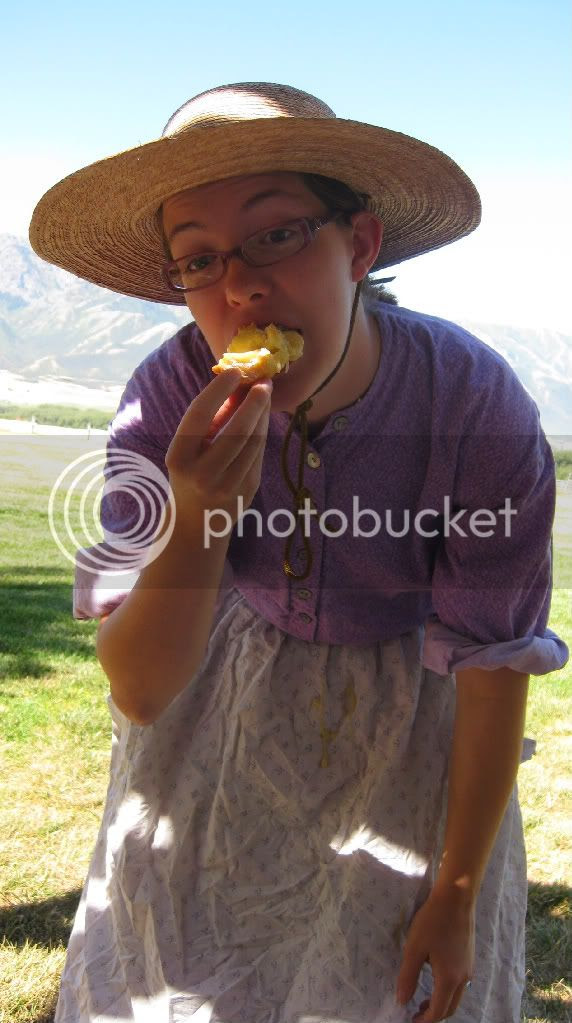 We noticed they had a tiny kitten. 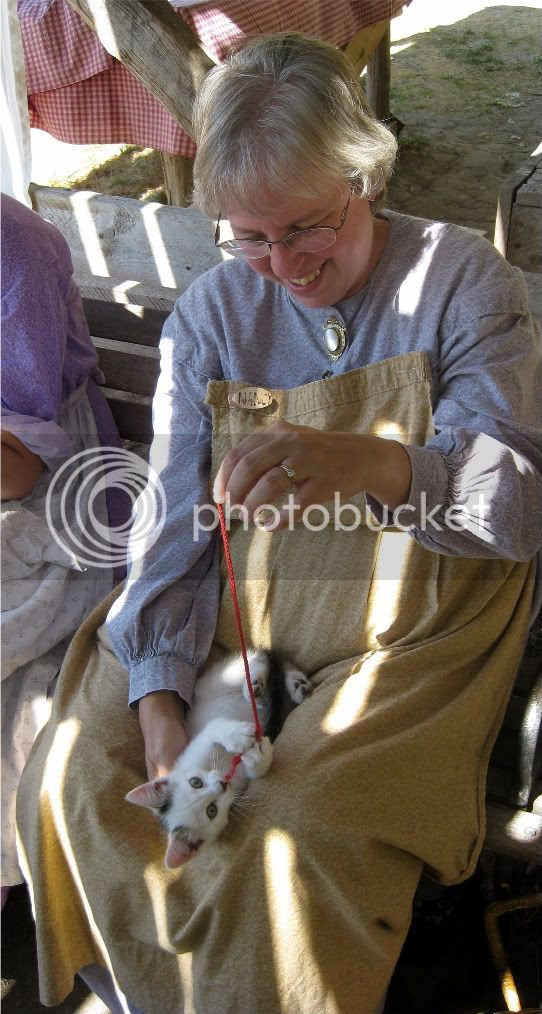 In gratitude for the precious cream puffs, they let us hold it. Hooray! A day well spent. 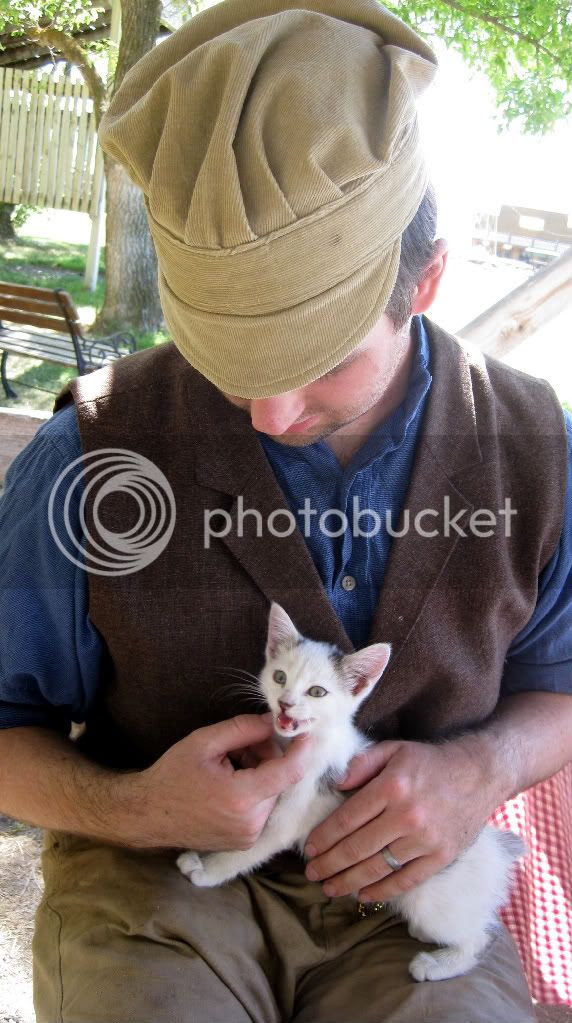 Deviled eggs: A bit different from your regular mayo/Miracle Whip variety, but tasty. These would be good for people with milk allergies or intolerances. I also like the idea of sandwiching two halves together and tying them with cute ribbon. This keeps the tops from getting all crusty, makes it cute, and encourages people to take one bundle instead of just-one-more-half until they have eaten a ton and a half of deviled eggs. I have to restrain myself from doing just that.

Ham and pickle sandwiches: Hammy! And pickley. It tastes just like what it sounds like. This would be good for leftover ham. If you're not going to eat the sandwich right away, I'd actually recommend filling the sandwich before refrigeration, rather than refrigerating the filling. The hardened butter makes it sort of crumbly on the bread.

Cream Puffs: For other time travelers, these are excellent for getting in with the locals. They were really good. Baking them in muffin tins made them super tall and puffy, which is nice. The filling could use about half the amount of sugar called for. It's good as is, just too sweet for my tastes.

Saratoga Potatoes: I imagined these would be like potato chips, but they were not thin enough. Still tasty though. I recommend eating these right after you make them, though. After chilling overnight, they weren't nearly as good as when they were hot and sizzling.
Posted by Jana at 6:56 PM

Email ThisBlogThis!Share to TwitterShare to FacebookShare to Pinterest
Labels: 1900's

The Cream puffs were simply delcious! And i loved the Saratoga Potatoes, and i usually hate potatoes! YUM!

Glad you liked them! :D

Burning question - did you really use lard to fry the potatoes?

Alas, no! I used vegetable oil. Perhaps lard would have transported them to the realms of the fantastic!

Wish I was with you on your picnic...everything looks so good...automatic wardrobe adjustment circuit...loved that too LOL !

Spry to cook those Saratoga Potatoes !

Surely with Spry, the Saratoga Potatoes would have been sweet and digestible!

The idea of foraging a few luxury items from a nearby farmhouse is perfectly magical.

It is, isn't it? Sounds lovely!