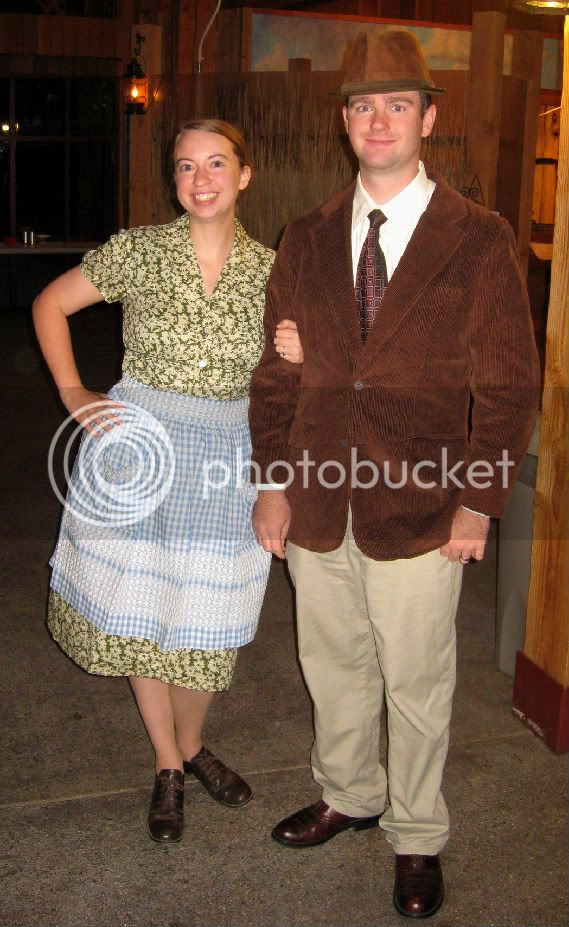 My favorite local museum hosted a lecture on the Depression era, and asked me, culinary chronaviatrix extraordinaire, to provide a Depressive repast. Here is the menu I came up with. It is a combination of foods you'd find in soup lines and rural areas. 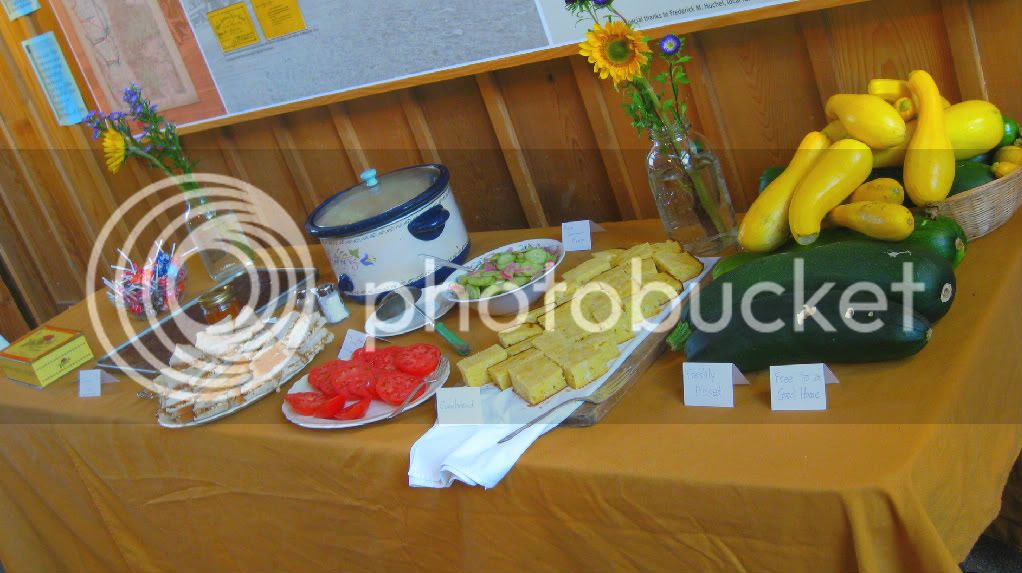 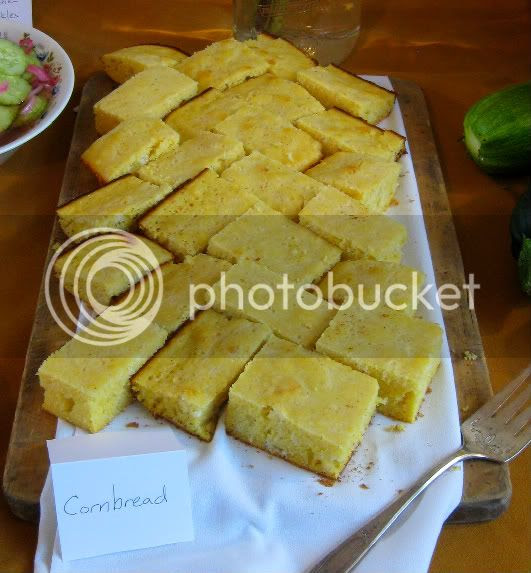 2. In a large bowl, whisk together flour, baking powder, salt and sugar. Mix in the cornmeal mixture, eggs and oil until smooth. Pour batter into prepared pan.

3. Bake in preheated oven for 30 to 35 minutes, or until a knife inserted into the center of the cornbread comes out clean. 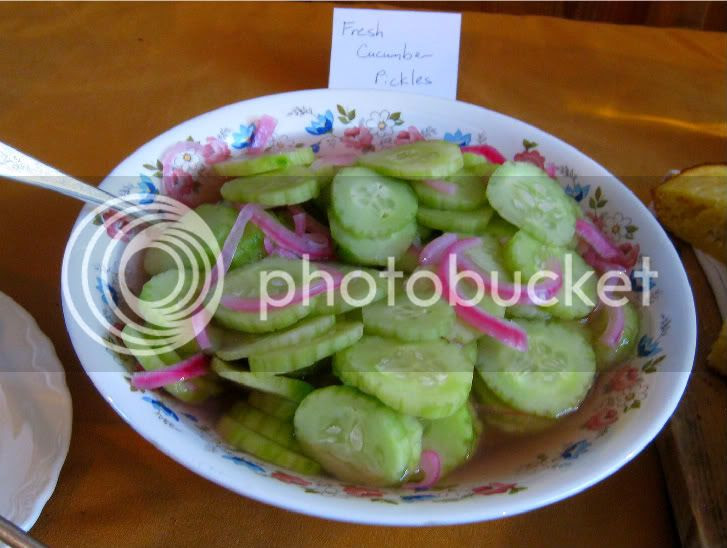 Fresh Cucumber Pickles
I made them here, as well. It is a useful recipe.
sliced cucumber
sliced onion
white vinegar
water
sugar
salt

Make a solution of one part vinegar, one part water. Add a couple teaspoons of sugar and one of salt. Do not worry. More or less will be fine. Put in the cucumbers and onions and refrigerate for an hour or two. Or 15 minutes. I don't care. Eat them.

If you want to be fancy, score the sides of the cucumber with a fork before you cut it. Then when you slice it, the slices will have an attractive edge like these ones. If you use red onions, after a couple days the solution will turn an attractive pink. You can also reuse the vinegar/water stuff, just throw in more cucumbers. In the above cucumbers, I put the red onions in a day before, so the water/vinegar solution would be attractive. 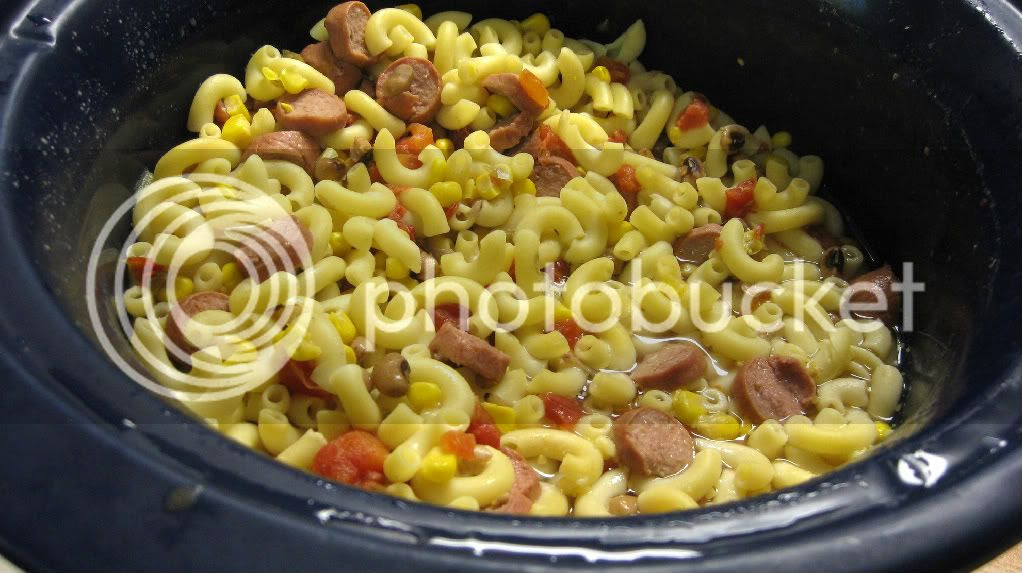 1 box of macaroni
1 or 2 cans of whole tomatoes, spanish style (I used Rotel)
1 package of hot dogs
1 can of corn or beans (I used black-eyed peas)
Water

1. Cook macaroni according to the instructions on the box.

2. While it cooks, slice the hot dogs into very thin "coins."

4. Combine the contents of the cans and the hot dog slices in a large pot, and bring to a simmer.

5. Break up the tomatoes into small chunks as the mixture heats.

6. Drain the macaroni when it is barely Al Dente. Reserve the cooking water to add to the pot, if needed.

7. Add the macaroni, and continue simmering until all of the ingredients are thoroughly heated and the hot dogs are cooked.

There are substitutes for all quantities and ingredients as necessary for the budget and to suit your tastes. If using another style of canned whole tomatoes, add finely minced green pepper and onion to the ingredients; they can be cooked with the macaroni as it boils.

Mrs. Dunn says: This recipe dates from the depression years and on through WWII; and was then a luxury or celebration meal, since it included meat. We kids loved it, and it was a stand-alone meal needing nothing else – though we usually had it served with carrot and celery sticks when available (if Papa, the cook in our family, hadn't already added them to the pot of macaroni as it cooked). The macaroni usually was technically overcooked in the end, but Papa had us convinced that that was how it was supposed to be for this dish (calling it macaroni rags), and we thought it was delicious. The Hoover in the name refers to President Herbert Hoover, who was popularly blamed for the depression years at that time. 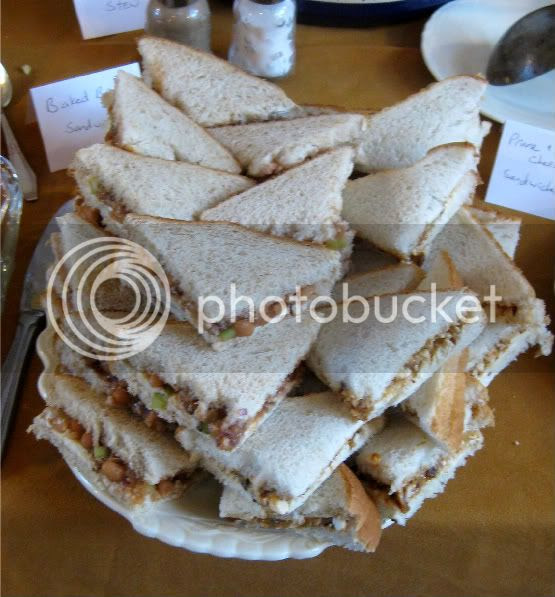 Mix all the ingredients together and put on buttered bread.

Prune-Cheese Sandwiches
I cobbled this one together based on some modern recipes and 1930's restaurant menus.

Put prunes in pan. Pour just enough water in to barely cover prunes. Add in abooooout 2 T. sugar. Simmer until prunes are soft and most of the water is absorbed. Puree or finely chop prunes and mix with cottage cheese. 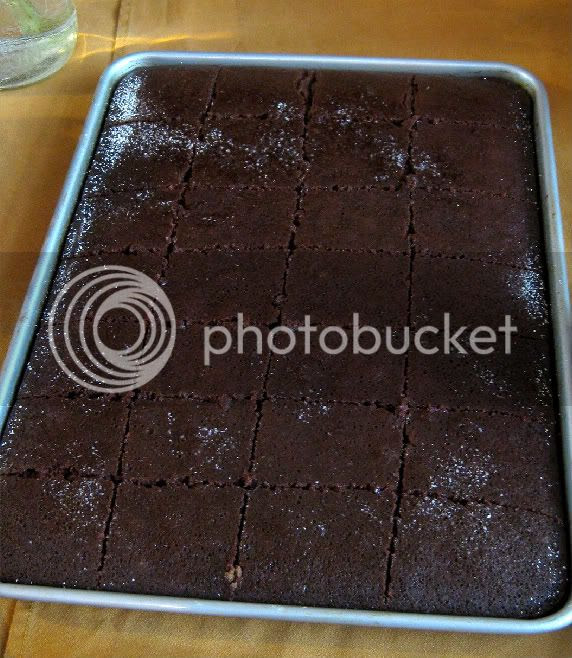 Sift flour, sugar, salt, soda, and cocoa together into a 9 x 13" pan. Make three wells in the dry ingredients. Pour oil into one well, vinegar into second, and vanilla into third well. Pour cold water over all, and stir well with fork. Bake at 350 degrees F for 30 to 40 minutes, or until tooth pick inserted comes out clean.

Cornbread: That is my favorite cornbread recipe. It is delicious. Especially with real butter and apricot freezer jam.

Hoover Stew: Luckily for me, the guests were primarily poor college students. ;D Many of them enjoyed it. The only problem was that it was very very bland. My friend, who asked me to do this in the first place, later reported it was better with Tabasco sauce the next day. I feel it would be entirely acceptable, and even delicious, with some broth or bouillon instead of water. This makes a ton of cheap, filling food that contains complete proteins, so if you are hurting for cash, this may well be a recipe for you!

Baked Bean Sandwiches: I really liked these, actually! It reminds me of putting baked beans on hot dogs. I even plan to make it again some time, but with the addition of some nice sharp cheddar. Yum.

Cottage Cheese and Prune Sandwiches: They were fine. Not as bad as you are thinking, just kind of fine.

Crazy Cake: Crazy cake is delicious. I've had this recipe for a long time, and make it fairly frequently. It is nice to have only one dish to wash. One of the guests was pleased that it happened to be vegan, as well. I sifted powdered sugar generously on the top at home before I left, but the cake melted and ate it before I got there. Sigh.

Whitman's Sampler: The morning I made the food, nothing seemed to go my way! The toddler I babysit kept screaming and sobbing, and until finally she went to sleep. Then I made the crazy cake. I accidentally doubled the recipe but did not double the pan size, which meant it was powdery on the bottom and liquid around the sides. I then stubbed my toe. After that, I discovered I was out of cocoa powder. Darling Husband volunteered to run to the store for some more. When he returned, he returned with not only the cocoa powder, but a box of chocolate, which he felt that I deserved. Serendipitously, he got the very type of chocolate that was available during the Depression! I considered whether to take it along. Then I thought, nahhhhhhhhhhhhhhhhhhh. 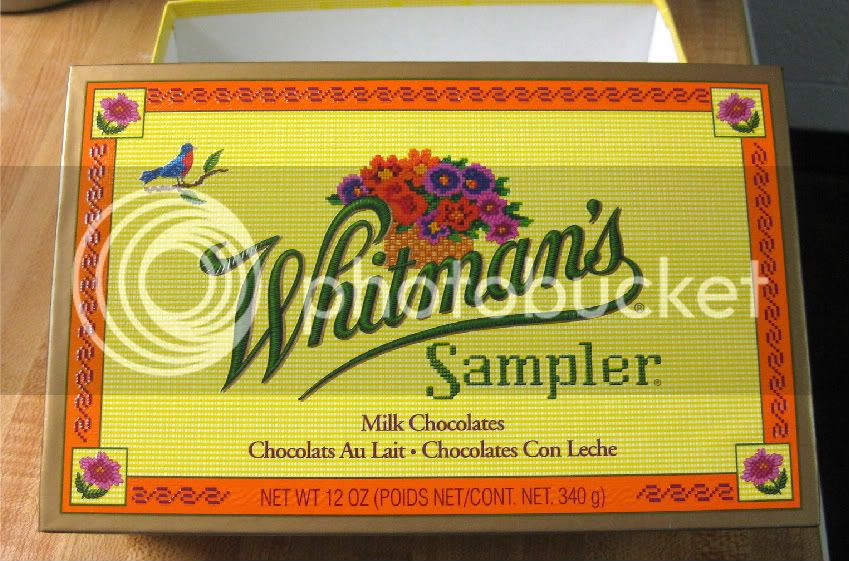 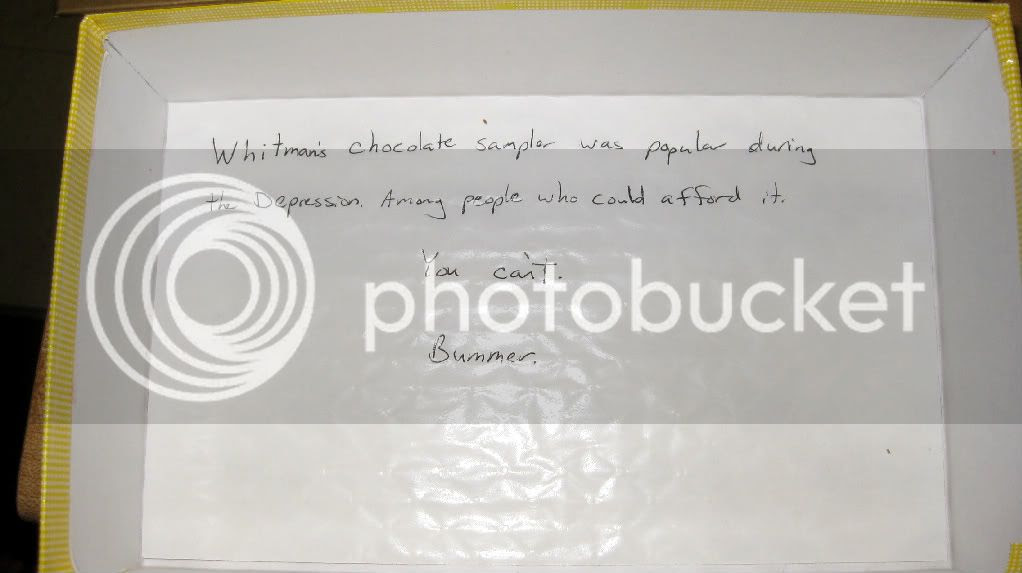 "Whitman's chocolate sampler was popular during the Depression. Among people who could afford it.

The toddler then woke up just as I was about to remake the cake, very very grumpy. 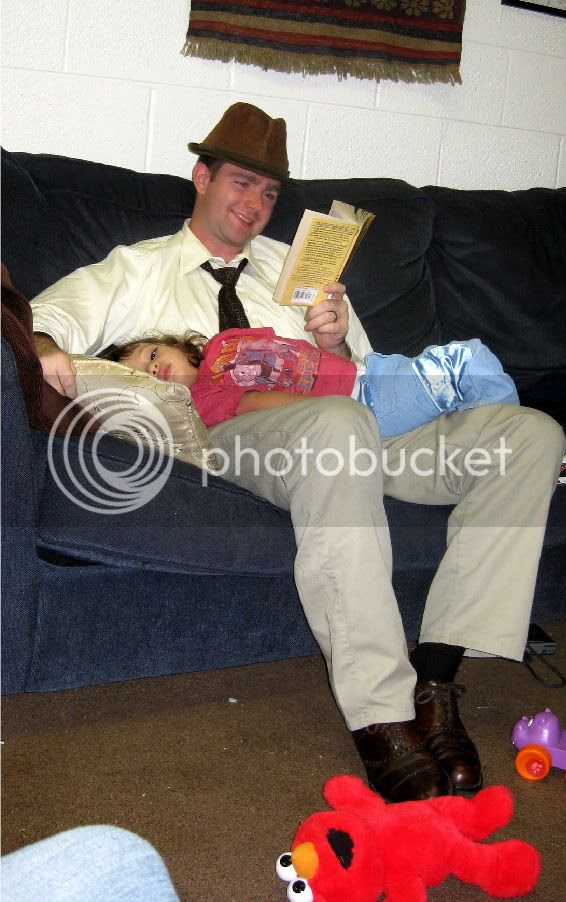 Husband is a GOOD husband!

Email ThisBlogThis!Share to TwitterShare to FacebookShare to Pinterest
Labels: 1930's

I wouldn't have shared either. ;)

Bravo...another good bunch of recipes ! So impressive you were able to show your talents in such a wonderful way.

My parents grew up during the Great Depression. I've heard a lot of their stories ( and my Nana, my Mom's Mom, told me some doozies too ) and we today really cannot fathom how desperate the times were back then. It is really interesting to see some of the possible meals they ate. There was never enough of anything during those years and then later during WWII...we are so spoiled today compared to what life was like back in that time !

NB- Yes! I did not include the recipes from my family that came directly from those times, like mush and creamed green beans on mashed potatoes (flour+milk+canned green beans). What are some of these doozies from your family?

Those baked bean sandwiches look like they'd be good to whip up when you haven't bought groceries in a while and the pantry has gotten down to just the really random stuff and condiments. I always feel a certain sense of pride when I come up with a meal from an apparently empty kitchen. Come to think of it, I guess that's what depression cooking was all about.

I was reading a depression era cookbook (don't remember the name, sadly) which characterized scrambled eggs as a rare and luxurious treat.

You are very right, Jenny Jo!

My family ate a lot of meats and rice, with veggies in a pot. Most of the time, my family and their neighbors pooled their food resources and made big pots of stuff to share. All kinds of strange combos. Doesn't sound too bad if that's all you have to eat. It was basically a taste of meat, a few pieces of veggies and a lot of rice, potatoes or pasta to fill their bellies. When they didn't have chicken, beef, pork or any fish, they had to make dinner with Horse meat during WWII ( usually spaghetti sauce to mask the taste ) My Mom told me Horse meat is a really weird purple color and it made her sick thinking about eating it but when you are hungry, you eat it ! The recipes were simple. My Nana made her stews with dumplings on top and it was very boring eating during the depression and WWII because it was hard to get all the ingredients to make a recipe that tasted good too. My Mom said after the depression and WWII, they had a heyday being able to shop and buy whatever foods they wanted at the stores. In Europe and the Far east it was 7 - 10 more years of rationing and the Marshall Plan before they got back on their feet !

My mom made those cucumbers a lot when I was growing up. I love them. If cucumbers agreed with me more, I would make them as a grownup. I like the red onion idea!

Haha! This is great! That is so mean about the chocolates, but it's pretty funny too. And true. It sounds like it was a fun thing to plan.

Any excuse to dress up!

Oh, what happened to the pictures? :<