While Nostradamus is most famous for vague prophecies, he made his living as a physician.  And, as we know, that means he has candy recipes!  Because sugar is a health food. 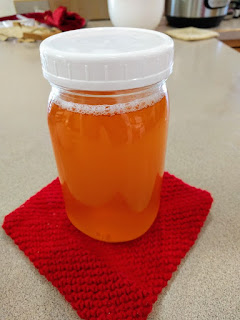 Making Purging Rose-Water
which, if you take an ounce of it, will produce a wonderful effect without any other ingredient.  Pregnant omen may be given it during their first and last months and it may be taken at any age and at any time without the slightest danger.

Take 900 or almost 1,000 of the most beautiful flesh-colored roses, the buds of which are half-open and which still have leaves.  When you have carefully plucked off the leaves and cleaned the buds in the best possible manner, rub the buds between your hands, so that in case one were still whole, it would open and the hot water would be able to penetrate it all the better.  Then put the roses into a large glazed earthenware pitcher and boil them sufficiently in well water.  Add additional boiling water and stir the roses well with a pieces of wood or a stirring spoon, so that they are well mixed up and covered with water.  Leave them to steep for twenty-four hours.  At the end of that time, pour everything into a kettle and boil it up two or three times.  Strain off the broth and compress the roses as hard as you can in a press or between two pieces of wood until nothing remains except dry white roses.  The broth will look like red wine and will smell like rose-water.  Pour everything into a Venetian glass container suitable for the purpose.  Next take a further 500 stripped roses and, as before, put them into the pitcher.  Then take the said broth and heat it until it is almost boiling.  At that stage pour it over the roses and, if there is not enough, add a little boiling water.  Leave the mixture to steep again for a further twenty-four hours.  At the end of that time strain everything, compress the roses as hard as possible and, when that has all been done, take about eighteen ounces of sugar (without cleaning it first) and put that into the broth.  Boil it until it acquires the consistency of a syrup, but has not boiled as hard, since the roses have a sticky slime which will thicken the syrup.  As soon as the syrup boils, pour it into a glass or glazed earthenware container.  If you take an ounce o this in the morning it will be exceptionally wonderful and have a very good effect.  Some people enrich this with rhubarb and then it works even better.  As such it is known as catharticum imperiale, that is a purging or cathartic juice, suitable for noble lords, kings, and emperors.  That is what happens if you add rhubarb to it.

Take Four ounces of the best and most exquisite rhubarb and a drachm of good strong cinnamon.  Pound everything and, when the syrup has almost boiled, take the rhubarb, wrap it up in a clean felt cloth and suspend it from a string into the syrup while it is boiling.  Squeeze it out and when the syrup has boiled, pour it into its container and hang the rhubarb in it, covering the container carefully.  This juice should be used by noble lords who have authority over others but who are unable to control or master their anger, for by taking only one ounce of it, their rancour will be dissipated.  Also it is extremely good for getting rid of the three-day fever and for protecting people against it and is numbered among the royal purgatives which may be taken without any ill-effects.  It can equally well be prepared another way, so that it is just as good, potent and suitable for purging.

Collect and extract 1500 half-open flesh-colored rose buds?  Sure, Nostradamus, let me get right on that.

As the wind is southerly and I know a hawk from a handsaw, I decided to instead use pre-made rosewater.

Big Fat Lazy Cheater Catharticum Imperiale
1. Put a bunch of chopped up rhubarb and a cinnamon stick in a pot
2. Add some water
3. Simmer until the rhubarb falls apart
4. Strain
5. Add sugar and simmer until it is a syrup
6. Add rosewater until it tastes nice

Verdict: This is excellent.  Rosewater, cinnamon, and rhubarb are great together.  It would make a really fabulous gelatin, and I'm totally going to try it sometime.  I told my kids that it was a medicine from a long time ago when they thought sugar was really good for you, and it was supposed to help cranky people be nice.  A spoonful was inserted in each mouth, and it met with general approval.  Soon after, both of them claimed to be feeling REALLY CRANKY and needed some special medicine to help them feel nice again.  The poor dears obviously sensed this medicine's effectiveness.  They have very sensitive natures.  So it works!  SCIENCE.

In my head I like to imagine some noble lady reading this book and being all, hmmmm! "'This juice should be used by noble lords who have authority over others but who are unable to control or master their anger, for by taking only one ounce of it, their rancour will be dissipated.'  Excellent!"  Then next time her husband is on a rampage, beating serfs or kicking dogs or murdering French P.O.W.s

"Here honey, try some of this drink I made for you for no reason, certainly not because you are a giant tool who threatens to put babies on pikes and smash in the skulls of the elderly.  Love you, lambkin!"

You are too funny. "Let me get right on that." LOL! Also, love the gifs.